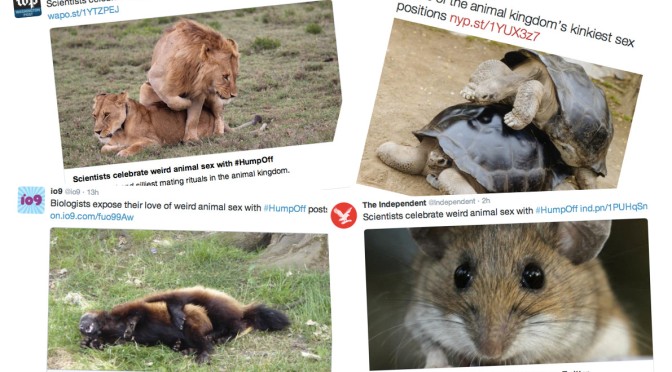 I am coming to the end of my week-long tenure at @RealScientists – a rotational twitter account that brings a different scientist to its readers every week. This week, I started with the best of intentions – tweeting about genotype-by-environment interactions, phenotypic plasticity, and studying ‘animal personality’…

Yesterday: how phenotypic variation is underpinned by genes and the environment, and a digression into plasticity! https://t.co/q0nnxanlyt

First thing this morning: people had OPINIONS about me being fine and dandy with 'data' as a collective noun… https://t.co/3FxThrxRfC

We can also see how variation in individual-level plasticity affects the phenotypic variation at population-level pic.twitter.com/0mOXo6OAib

We should then expect to see a negative correlation between these traits in the wild, right? pic.twitter.com/NIfrJFrbyR

I am using *simulated* predator attacks to do this, and investigate variation in behavioural plasticity… pic.twitter.com/df68SaVkGT

And this is where your analysis stops being polite (univariate)… and starts getting REAL (multivariate) pic.twitter.com/1g9GdZ0b1q

…but things took a turn when I decided to follow Anne Hilborn‘s previous competitive hashtags and start a #HumpOff!

It soon took hold, with entries flooding in from across the world, and covering all manner of amazing humping-related facts! The ‘competition’ even made it into the media, with coverage from the Washington Post, New York Post, io9’s Gizmodo blog, Slate’s French site, what appears to be a Croatian tabloid, Serbian National Geographic, the French newspaper 20 Minutes, and the Independent! I was interviewed for the NY Post via email, but I had to come back from the pub to write my replies – none of which made it into the article. Let’s say it was because they were delayed, not that I’d had a really strong beer and started rambling a bit…! Anyway, I thought I should post my responses, in case anyone is interested in the purpose* behind the #HumpOff.

*may include post-hoc reasoning

How did the idea for HumpOff come about? Is it recurring or was this the first time?

I really enjoyed the ‘JunkOff’ hashtags that Anne Hilborn started recently, getting scientists (and non-scientists) to post photos of animal genitalia (perhaps I should revisit my use of ‘enjoyed’ there…!). My PhD was in the field of sexual selection and life history: I used crickets to investigate how males invest their energy in trying to attract females across different ages, and how this impacts investment at other ages, in lifespan, etc. The side effect of this is that I’ve spent a not-inconsiderable chunk of my adult life thinking and reading about animal sex! I know there is so much awesome and weird sex stuff out there in the animal kingdom – way beyond just genitalia(!) – and I wanted other people to know about it.

Is there a deeper goal? Like awareness or just for fun?

It’s been a LOT of fun, and the main idea was just to make people aware of just how much crazy diversity there is in animal mating systems – not just between but also within species! There are weapons that evolved through male competition for mates, ornaments from female preferences, alternative strategies (big males that fight rivals for access to females, while smaller males ‘sneak’ matings behind their backs), sexual conflict – where males and females have conflicting interests, which can create ‘arms races’ in evolving adaptations (e.g. in water striders) – and even sex role reversal! For example, in some dance flies, which are studied by my PhD supervisor and his supervisor before him, the females can have ornaments that make them appear bigger in the mating swarms. These females don’t hunt, but instead rely on ‘nuptial gifts’ of prey, offered to them by males during courtship. Males prefer to mate with females that look big and bursting with eggs, so females with ornaments (that make them look bigger) will get more matings, hence more food – this is how we think the ornaments evolved:

Part of my job as an evolutionary biologist is to think about why there is so much diversity (both within and between species). What are the different pressures that select for adaptations? Why is there so much variation within populations, especially in sexually-selected traits? I want people to be aware of the amazing diversity in the animal world, even in the tiniest, weirdest creatures, and think about why these adaptations and systems have evolved.

So many favourites! Here are a few:

I broke the dreams of someone who posted a nice picture of mating damselflies that create a heart shape:

Guys OF COURSE male damselflies have crazy penises that remove the sperm of their mate's previous partners #HumpOff pic.twitter.com/R9zDh6yIHS

Female haglids eat the fleshy hindwings of males during mating – but that gives the males just enough time to attach their spiny genital sex traps, after which they can push the female off their wings but continue the mating!

Among haglids, females feast upon the male's fleshy hind wings during mating! Pics: a) virgin, b) non-virgin #HumpOff pic.twitter.com/IonxcwT8h8

I don’t even know what is happening here:

But I do love that Nate Morehouse provided a photo of the butterfly ‘vagina dentata’!

Will a winner be announced since its a “competition”?

Haha, maybe! The anglerfish got a lot of traction, possibly because of the oatmeal comic, and the antechinus also has a lot of fans – which is fair enough, as it’s a tiny, cute mammal that sexes itself to death. However, I think I’ll use my own biases to pick an insect winner. Invertebrates have to get a win sometime, it may as well be for the #HumpOff!

One thought on “Outreach: starts with Real Science, ends in a #HumpOff”