2014 is drawing to a close; it’s been a weird year, and I didn’t realise until now quite how much I’ve neglected writing posts on here. I have been spending more time on photography, although you will have to indulge the first section of this post being filled with photos taken by others…

I have a good excuse for no blog posts during the first couple of months of 2014 at least, as my PhD thesis was due for submission at the end of February. My state of mind is probably evident in that the only photographs I took during this period were of my pet mantis eating some of my study species (the decorated cricket, Gryllodes sigillatus).

Even more telling are the photos of me handing in my thesis.

Yes. That’s the face of a man who has barely slept for many days, getting blasted by a party popper. Thankfully I was looking a little better by April, when I defended my thesis (‘Causes of adaptive differences in age-dependent reproductive effort’) in my viva; Dr. Andre Gilburn (University of Stirling) and Dr. Alexei Maklakov (Uppsala University) were the examiners, and we had a really interesting and fun discussion! As several people have said, you should make the most of talking to the only people who will ever read your thesis…

Of course, I looked even better once I had donned my viva hat; this was devised and created by next-in-line at the Bussiere lab, Ros Murray. Lilly has a lot to live up to when it comes to making Ros’ hat! 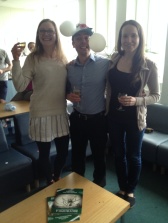 I should take a quick moment here to thank not only Luc, a fantastic supervisor (and all-round awesome guy), but also Ros and Lilly for general labmate amazingness, the rest of the Bussière lab (particularly Claudia, Toby, Svenja and Rheanne), Matt Tinsley, Stu Auld, Pauline Monteith and Jim Weir. Also the crickets. Sorry you’re all dead! The crickets, I mean. All of the humans are still alive. I think. And if they’re not, I definitely had nothing to do with it.

Kirsty also finished her postdoc at around the same time as my PhD ended, but we managed a few trips to see some wildlife before leaving our beloved tiny Stirling flat – including iconic golden eagles in Findhorn Valley: 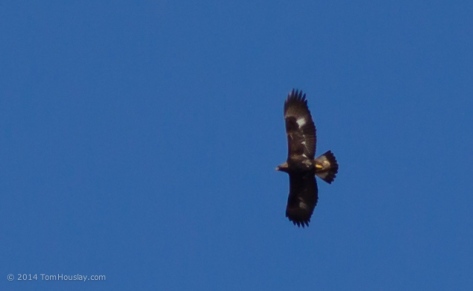 Which mainly involved doing this for ages:

But it was awesome. Also awesome: OTHER STUFF IN SCOTLAND. The following photos were taken at the Argaty red kite station near Doune; Carron Glen nature reserve in Denny; Loch Garten; and Baron’s Haugh nature reserve.

We moved to Cambridge in May, and I have been amazed at the increase in invertebrate diversity compared to central Scotland… also, we have a pretty great garden, and nice fields and nature reserves nearby to go wandering around! I have been using these opportunities to practise macrophotography, using my Canon 100mm macro, the Canon MP-e 65, and the Sigma 15mm lens for some wide-angle macro… 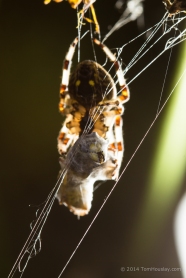 I have also been photographing burying beetles for Prof. Becky Kilner’s group at the University of Cambridge, and one of these photos was given a commendation in the Royal Entomological Society’s National Insect Week photography competition: 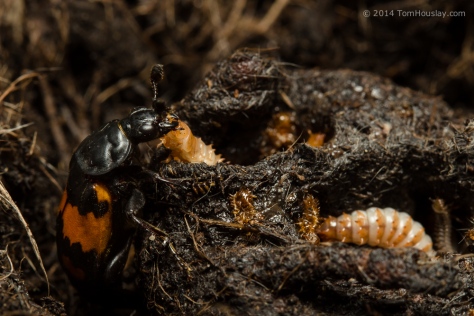 Another macro photo was used as the cover photo for the new album by Fresh Eyes for the Dead Guy:

I have also tried to branch out into some non-macro photography, particularly playing around with long exposures, flash, and some black-and-white work. The first photo here was taken on the banks of Loch Lomond in December, by the SCENE field station where I was teaching a workshop on statistics and R alongside Luc (another one to be held in April, and places are already running out!).

The podcast has had something of an up-and-down year, as we’ve all been crazily busy and it’s hard to pin everyone (plus guest) down for a timeslot weekly. However, we’ve still had some great episodes; here are some of my favourites:

The inimitable, execrable, unrepentant badass that is Katie Hinde. Did you know that studying the evolution of lactation was a thing? IT IS.

We also got involved with #SAFE13, a really important movement that is well represented by the fantastic work of Kate Clancy, Katie Hinde, Robin Nelson, and Julienne Rutherford. Not quite as light-hearted as the others above, but certainly thought-provoking and well worth half an hour of your time.

Next year, I’ll be trying to write some fun posts on research that excites me, and hopefully illustrated with more photos! I am trying to concentrate on getting interesting shots, either due to animal behaviour or better composition. I would appreciate any comments on photos here or on my 500px / flickr pages; any comments or suggestions about blog post entries are always welcome too! Hopefully the BreakingBio podcast will start strongly again in 2015 too, as we have some great guests lined up to join us.

Also, I need a proper job. I’m trying to push through publications right now, so hopefully I’ll have some paper summaries of my own to come…