I’ve just uploaded my poster to the ESEB website, so I thought I’d share it on here as well. In what I hope isn’t a flaw confined solely to myself, the title and abstract are now a little different from what I submitted way back when at the registration stage…! In fact, I ended up chucking out a lot of what I originally had on the poster, so it’s even more different now. I’ll try to put the bonus figures on here later if I get a chance. For now, I’ve put the abstract underneath the image of my poster below, in case anyone’s interested.

Click on the poster to have a look at the PDF, or alternatively just accost me in Lisbon – I’m particularly keen to talk to anyone who might be able to help me work out how to apply van de Pol and Verhulst’s work on age-dependent traits to my data, or who wants to discuss problems of age-dependent behavioural traits (and preferences?!), and also anyone who thinks they might want to employ me once I finish my PhD (well, it’s worth a shot, right?).

I’ll be hanging around my poster in the ‘Phenotypic plasticity’ symposium on Tuesday’s poster session, and otherwise will be around, being excited about all the awesome science, and more than happy to chat to anyone about insect sex, going to Borneo, or even… 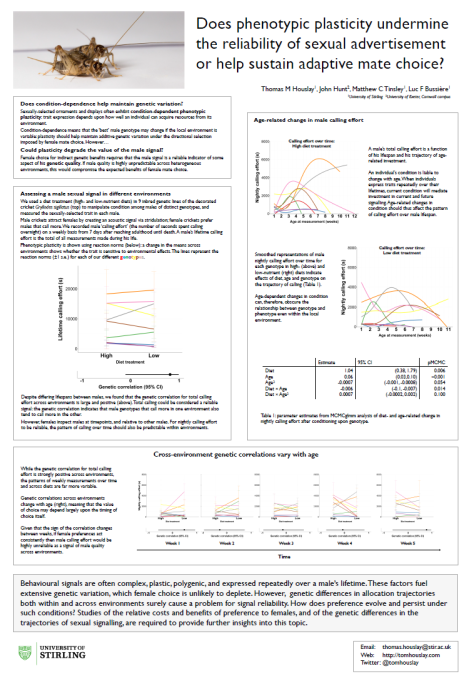 You can leave your ‘too much text!’ comments at home, though. I already know.

Exaggerated sexual traits can provide information to females about male performance, even if the precise alleles that confer high performance change along with environmental conditions. This plasticity in signalling may help to preserve genetic variation that would otherwise be eroded by strong mate choice, but it can also compromise signal reliability if environmental conditions change during development. We manipulated resource acquisition by altering the diet quality of inbred lines of decorated crickets (Gryllodes sigillatus) at both juvenile and adult stages. This allowed us to study both the effect of diet quality and a change in environment during development on trait expression. We measured a number of sexually and naturally selected traits in both sexes, revealing striking differences across diets in the expression of morphological and behavioural traits. We then assessed the reliability with which various traits signalled resource acquisition by assessing their genetic variance, as well as the covariance between traits and across environments. Our results show that traits such as body weight and calling effort, the male sexual advertisement trait, are more sensitive to environmental effects than morphological traits that are fixed at eclosion. We also show that there are high genetic correlations between the expression of lifetime calling effort in different environments. Females assess males based on current advertisement levels, rather than on a lifetime total; as an individual’s condition will mediate investment in current and future advertisement, age-dependent changes in condition can further obscure the relationship between genotype and phenotype. Genetic correlations between single measures of calling effort across environments for different age groups, and across age groups within environments, were low and even changed sign between timepoints. Variation in calling effort caused by age and environmental heterogeneity should help maintain genetic variation in sexually-selected signals, but plasticity in such complex, behavioural trait presents problems for their origin and persistence under models of good-genes mate choice.