Before I depart these shores for a few weeks, allow me to take a quick opportunity to do some ranting. It’s against something that anyone working in the field of sexual selection will likely have done, and definitely will have seen. It’s predictable, it’s lazy; it’s also entirely innocuous and not something anyone should really care about. Therefore, I’m furious, I hate it, and it must be stopped.

I am talking, of course, about the use of pictures of peacocks on the opening slides of a presentation. 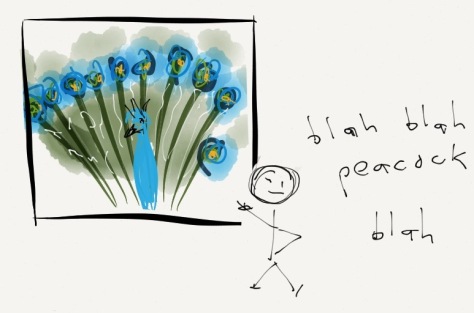 Oh, and sidling along apologetically shortly afterwards will likely be Darwin himself, and the famous quote from his letter to Asa Gray (preferably in a flowery typeface):

“The sight of a feather in a peacock’s tail, whenever I gaze at it, makes me sick!”

This is generally used to set the scene for discussion of Darwin’s idea of sexual selection, particularly in terms of female choice for spectacular males: that fantastic male ornaments exist because females prefer to mate with the best-ornamented males. However, you may have noticed that a reference never pops up onscreen whenever the speaker blithely proclaims that sexual selection explains the existence of the magnificent peacock’s feathers. Evidence for the influence of train-feather eyespots on male mating success is somewhat conflicted*, and, intriguingly, peacocks have actually been useful in providing evidence for the loss of male ornaments over time. Now, don’t go thinking that I’m about to get all Joan Roughgarden on the general principles of sexual selection, nor that I’ll join the creationist school of thought that a failure to find good evidence of something in a single species at a given time somehow disproves a large, well-studied theory with a mountain of evidence across a huge variety of taxa. It just seems to me that, given Darwin spent 20 years accumulating evidence with which to back up his theory of natural selection**, he was probably a bit of a stickler for data.

So, with what should we replace the magnificent peacock when discussing female preference for male ornaments? Well, first let’s set a little scenery of our own, by looking at the history of sexual selection theory. Darwin outlined his thoughts on the evolution of male traits for enhancing reproductive success in ‘On the Origin of Species’; he then detailed it thoroughly in 1871’s ‘Selection in Relation to Sex’, which was published alongside ‘The Descent of Man’ (criminally, some people still prefer to read the book on human evolution, which is INSANE). It attracted much interest, and no little criticism – particularly from Alfred Russel Wallace. While there are noble efforts going on just now to ensure that Wallace gets a little more of his deserved share of recognition for the theory of evolution by natural selection, he certainly had a far more dour view of the animal kingdom than did Darwin. In fact, Wallace’s views led to around a century in which sexual selection was sadly neglected – despite the occasional foray into theory by the likes of the great statistician Sir Ronald Fisher – and natural selection was treated as the only real mechanism behind evolutionary change.

Wallace’s raging adaptationism meant that he tried to ‘explain away’ colourful ornaments; the idea that a simple female preference could overcome the power of natural selection was anathema to him. For example, it was his belief that, in many birds and other species with ornamented males, the colourful state was ‘normal’, an unselected side effect from the greater ‘vigour’ of males in comparison to females (which he also used to explain male displays in the breeding season, during which they were – presumably – excessively ‘vigorous’!). The females, meanwhile, were selected to be camouflaged in order to protect the nest. Helena Cronin deals with this period in fantastic detail in her book ‘The Ant and the Peacock’, and provides a telling summary when she remarks that Wallace “excelled in understanding the dull, the drab and the dowdy”.

It was not until 1982 that female preference for ever more extravagant traits was explicitly tested, when the Swedish biologist Malte Andersson stepped out into the Kenyan grassland, armed only with a pair of scissors and a pot of glue. Many years before, Fisher had proposed that female preference might be such that it could push a male ornament into ‘runaway’ status, whereby it would continue to become exaggerated until finally curtailed by natural selection. Andersson had come up with an ingenious experiment that would finally test whether this hypothesis. He wandered out into widowbird territory, and caught himself a whole bunch of fancy males. Next, Andersson clipped the tail feathers from a group of these birds, and then glued a small length of feathers back onto them (making short-tailed males); he also glued remaining clippings onto the tails of others (creating super-long-tailed males). He also – in a classic lesson in experiment design – had two groups of ‘normal-length’ tails, in which one group had their tails cut off and then glued back on again. This was to check whether some part of that process could be responsible for results, not because Swedish biologists are unnecessarily cruel and unusual. The other control group was left alone, their tails unmolested. Then back into their marked territories they went, to display for watching females.

An hour after the birds were released, Andersson counted the number of nests on each territory; he then continued to inspect these territories for active nests on a weekly basis. An active nest is indicative of whether a female has mated with the male on that particular territory. Before having modified the tail treatments, Andersson had found only minor differences between the mating success of males, but afterwards he was struck by the huge increase in active nests of those males with elongated tails compared with all others. Having excluded territorial and behavioural differences (through randomisation, controls, and behavioural measurements), he concluded that females really were selecting males based on this seemingly arbitrary trait. Note that this experiment does not say why females were choosing the males with the longest tails, only that they were choosing them. The use of extra-long tails also showed that female preference went above and beyond the current range, as Fisher had hypothesised. The tail of the widowbird gave the first real evidence that male traits are favoured by female choice, and likely evolved through this mechanism.

But, back to my main point. Am I saying that we should simply replace all instances of peacocks with widowbirds? No, no I’m not. But when we talk about sexually selected traits, we’re often talking about weird ornaments, things that really shouldn’t exist, but do, and in “endless forms most beautiful and most wonderful”. We want to know why these things have evolved, in such varieties and with such incredible diversity. If we restrict ourselves to the same example over and over again, we are simply doing a disservice to the field in which we are privileged enough to work. Again, I point you to Malte Andersson, but this time to his wonderful 1994 ‘Sexual Selection‘ monograph; not only does he detail sexual selection theory from his well-placed vantage point, he also provides enough examples of well-studied, bizarre, intriguing animals to fuel your opening Powerpoint slide dreams for many conferences to come…

* Although, while I was writing this then I noticed Ros Dakin’s new research, but I was already ranting so let’s just pretend that didn’t happen or something. Also, she’s done some work on royal flycatchers! Sweet zombie jesus, they are THE BEST.

** remember, The Origin of Species was an ABSTRACT for the complete book that he had planned for his theory! If we have one thing to thank Alfred Russel Wallace for, it’s that he forced Darwin’s hand into this abridged version. I mean, come on.

UPDATE: below is my favourite response to this post so far…

UPDATE 2: if it weren’t such a cool study, I’d be really mad about this timing…

If you can’t be bothered reading the paper, check out this Scientific American blogpost on it…

4 thoughts on “The tale of the widowbird, or: how I learned to stop making the first slide in every presentation quite so horribly predictable”